by a Cat Called FRITZ 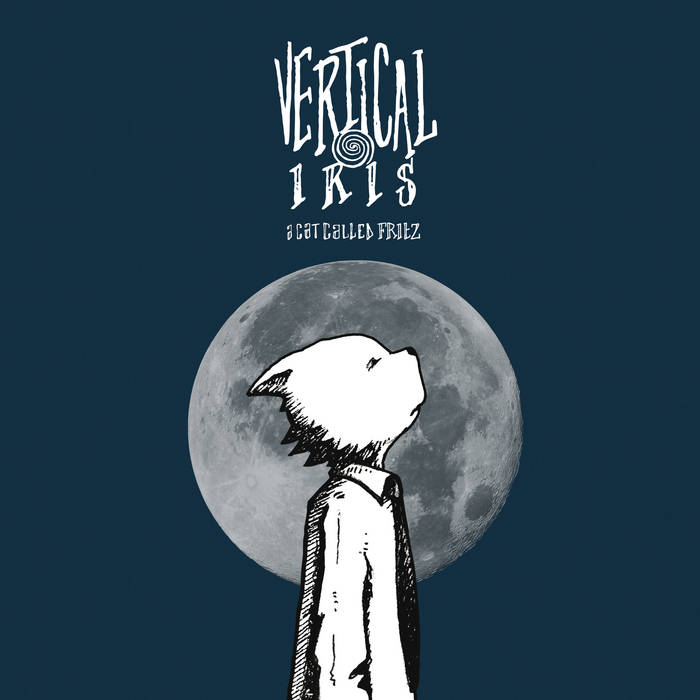 Imagine a star whispering the following words to your ear: everytime we fall or jump up and down, we are experiencing the force of gravity. Let’s explore it. Let’s hear the Sounds of Gravity.

Welcome to the new experience of aCatCalledFRITZ, Vertical Iris.
The special journey of a cool cat through world and space meeting other cool cats. During his flyby, Fritz spreads some frequencies with his groovy Jazz beats to different places and spaces.

This LP starts with Rock Outta Space and immerses you into Fritz’ universe;

Hello the world, at this moment, over 2 billion people, in every part of the world, in every nation of the earth, are focussing their attention on this... Music... Check out my Melody!

On his path, Fritz met Sach aka Nouka Basstype of the legendary underground Hip Hop group called The Nonce (L.A.) and they made a musical space trip over nebulae and galaxies, propagating their “7 senses” all around.
Naturally on his way he also joined his friend Audessey (Atlanta) of Soundsci. On this album Audessey is like a satellite, every complete revolution or rotation comes with a track. The first one is called Gravity and “Who knows what mystical force is at work right now?...”
Each turn comes with its challenge. A pause is required, every cat needs inward-looking attitudes, so Ego System is a dialogue between the cat and his alter-ego Dj Lyrik.
LayFullStop of Roots Raddix (Manchester, UK) is the coup-de-cœur of the cat. He was immediately charmed by her melody & flow and wanted to have her colors on his records. The sound they radiate is called Blueway.
Moreover, the funky track Everybody with Venomous2000 (New Jersey) is definitely a tribute to hip hop culture but mainly a call to “Everybody” in the constellation. In his spacecraft, Venomous2000 rocked it like nobody.
As Fritz continues his journey, he smoked the Buddha bless and merged with Mary Jane. As a radiance, he made a beat called Chronic. Fritz wanted to share this song with the kid named Glad2Mecha, and he was glad to meet him. Glad2Mecha felt the green color that emanates from the beat, and blessed the mic. This song was finally called 2 Hits.
Then, Fritz drifted like a space probe knowing the destination but not the path. His fly created that sound influx called Galactic Waltz.
Then came Pseudo Slang (Chicago) who Fritz met at a gig in France in 2016. Just like all cats they shared music together and wanted to move on and represent their macrocosmos on a track, they played rough on Ruff ’n’ Tumble.
Audessey is back for a second revolution that goes by the name of Mind Power, for this one a third star explorer was needed in order to search for “inner strength”. So another sidekick from Atlanta, who goes by the name of Pete Flux, showed up. It’s a small small world.
In 2016, Black Josh (Manchester, UK) and aCatCalledFRITZ collaborated for the song Sound Boy Killers featuring Sleazy F Baby & Truthos Mufasa. Since they had fun on this one, and since all MC’s killed that beat, Black Josh and Fritz wanted to play again and renewed the experience on the track Don’t Play Yourself. Two cats standing on the Hip Hop playground.
Back on earth, and in order to encrypt his fantastic voyage, Fritz provides us with We Got Shit, a vivid combination of ride and Jazz.
At last, Audessey is back for a kind of exhort Elevation through music, it could have been a chapter 2 for their previous project Beats Per Minute.

Have you heard the Sounds of Gravity ?

It’s been a couple of years that, in the dark alleys of a big city, the shadow of a lonely cat called FRITZ has walked anonymously in the crowd, and left his footprints in the indifference of the world around. Multifaceted artist, musician, beat maker & graphic designer, he follows his own direction and path and is 100% in control of “Tribulation & life” of..., his first full length album. ... more

Bandcamp Daily  your guide to the world of Bandcamp

MF DOOM is given his flowers, plus appearances from MC Jada Imani and Stanley Ipkuss